The EU's legitimacy in the wake of the financial crisis was discussed by an international group of researchers at the University of Oslo last month. PLATO has relevance written all over it, Vice-Rector Åse Gornitzka said at the project's kick-off conference. 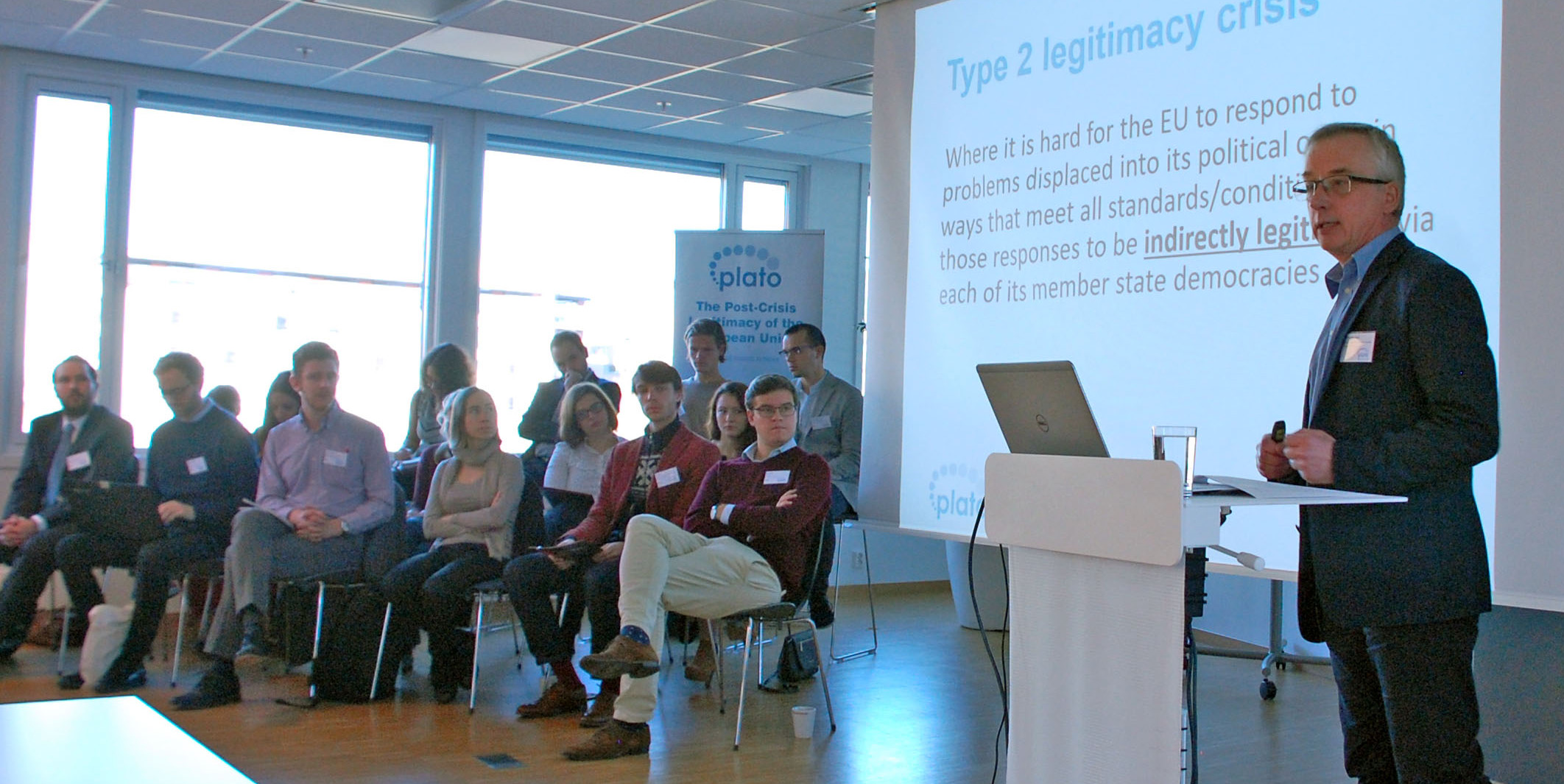 PLATO is an innovative PhD training programme which brings together nine partner universities across Europe as well as training partners from outside academia. At the kick-off conference, the project's team of 15 early stage researchers, who had recently been recruited, met for the first time for academic discussions and networking with project partners.

Relevance written all over it

The topic that PLATO studies is of great importance for Europe and for the European Union, Vice-Rector for research and internationalisation Åse Gornitzka said in her welcome speech. In its shape and innovativeness, PLATO is also of great interest to the University of Oslo, she continued, while pointing to the project's international collaboration and its novel and ambitious PhD training programme which complements traditional academic training with input and work experience from other sectors.

Addressing the 15 PhD researchers, Gornitzka concluded: 'PLATO is likely to change your life; in private, but certainly also in academia'.

What is a legitimacy crisis?

The 15 PLATO PhD researchers started off by exploring the overall framework of the project, introduced by PLATO coordinator Chris Lord from ARENA Centre for European Studies. What is a legitimacy or legitimation crisis as opposed to a mere legitimacy problem? Which conditions must be met for the EU to be directly legitimate with its citizens, or indirectly legitimate via each of its 27 member state democracies? What kind of legitimacy standards are we looking for: ideal or non-ideal standards; necessary or sufficient conditions? How could the EU meet demands of input, output, and throughput legitimacy?

In the opening discussion, the group of PhD researchers reflected on legitimacy questions and standards together with peers. The academic conference then moved on to presentations and discussions of the 15 individual PhD projects.

All projects speak to the same overall research question, but explore different aspects of the EU's legitimacy after the financial crisis; how it plays out in different policy areas and how it is perceived by different actors. The projects deal with popular understandings of crisis responses and voting behaviour, populism and corruption, the politics of courts and law, interest groups, parliamentary involvement and inter-institutional conflicts, migration and border controls, banking union and the EU emissions trading system, identity, citizens' trust and the public sphere.

See also the photo gallery from the academic conference

The recruited PhD researchers come from a variety of disciplinary backgrounds, including political science, political economy, law, philosophy, sociology, journalism, and languages. Several of the researchers in the group have double MA degrees and already master a number of languages. Each brings into the project relevant work experience either from the non-profit or private sector, media, academia, think tanks, or EU institutions.

The group of PhDs got to know each other in the days leading up to the academic conference. The group represent 15 different nationalities and are employed in nine different countries. All had recently moved to a new country to do a PhD as part of the project, and were curious to know the rest of the team. Over two days with ice breakers and team-building activities, the early-stage researchers challenged their creativity, cooking and collaborative skills, building trust and a genuine team spirit within the group.

Being an effective researcher

Team work, collaboration and creativity were also of the essence on a full day with Jen Reynolds of Vitae dedicated to professional development planning. PLATO's PhD researchers brainstormed and reflected in groups on priorities, goals and actions of a PhD, including the knowledge, skills and attributes needed to get started in research.

Considering their careers in a long-term perspective, the PhD researchers discussed their goals and milestones. They explored how to achieve their ambitions by means of professional development planning, which can serve the purpose of providing a road map, reducing stress, contributing to better self management, experiencing success and, in turn, being a source of motivation.

On the last conference day, Katie Wheat of Vitae guided PhD researchers and supervisors though a discussion of the supervisory relationship within the project's team PhD context.

The session confirmed that expectations towards supervisors and supervisees are not necessarily the same, and that it is useful to have a joint understanding on what to expect from the supervisor relationship from the outset. The participants contributed their ideas to PLATO's Supervision Charter, allowing researchers and supervisors to get off to the best start in their research and their relationships.

Reflecting on their experiences of the kick off conference, the PhD researchers highlighted the easy-going and open atmosphere of the group, including supervisors, and the surprising extent of group support they had experienced throughout the week. Despite their differences, the PhDs already felt they are on a level-playing field. They were motivated by the questions and suggestions for the individual projects brought up by peers during the academic conference, and by the networking opportunities beyond academia made possible by the presence of training partners representing think tanks and civil society.

The positive experiences from the first project event will be of great value as PLATO's PhD researchers work together as a team to explore intellectually challenging research questions from different perspectives and disciplines.