Multiple crises have created new legitimacy challenges for the EU. Have the EU’s responses to these crises been legitimate?

Legitimacy is at the core of ‘good government’. It means the justified or rightful exercise of political power. Since a right to exercise political power implies that people may have an obligation to comply even with some laws they do not like, legitimate polities are more likely to enjoy the unforced compliance of publics. Polities that can concentrate more on satisfying the needs and values of citizens, rather than coercing them, are more likely to deliver high levels of economic performance and to score well on indicators of human development.

After 2008, EU governments spent € 4.5 trillion of taxpayers’ money rescuing European banks from a crisis that largely originated in the international financial system. That displaced a financial crisis into political systems by straining public finances and social protections in all EU member states, bringing some to the point of insolvency, and threatening the survival of the EU’s single currency, perhaps even of the Union itself. Since then, the EU has experienced a migration crisis, a geopolitical crisis in its relations with Russia, and the Brexit crisis.

Whilst the EU has experienced serial crises, it remains to be investigated whether it has experienced a legitimacy crisis. We lack the knowledge, concepts, theories and methods needed to investigate scientifically just how far, if at all, the Union’s ability to make rightful or justified use of political power is in some way unequal to crises it has to manage.

The problem is that the existing literature mainly developed from an analysis of legitimacy crises within states. That, though, may not help us identify the character, causes and consequences of legitimacy crises where political power is exercised from beyond the state by bodies like the EU. Neither problems nor solutions to legitimacy crises are likely to be the same where the political order is not itself a state. Rather, the EU is a multi-state, non-state political system that seeks to solve problems from beyond the state, and in a manner that even transforms the very nature of political authority within the state itself.

PLATO responds to this difficulty by building a theory of legitimacy crisis that is specific to the EU. It follows the well-established research strategy of building new theory through multiple, connected case studies. To cover the variations that may need to be taken into account in constructing this theory, some of PLATO’s case studies investigate different actors with whom the Union needs to be legitimate. Other PLATO case studies will investigate different standards by which the Union may need to be legitimate. 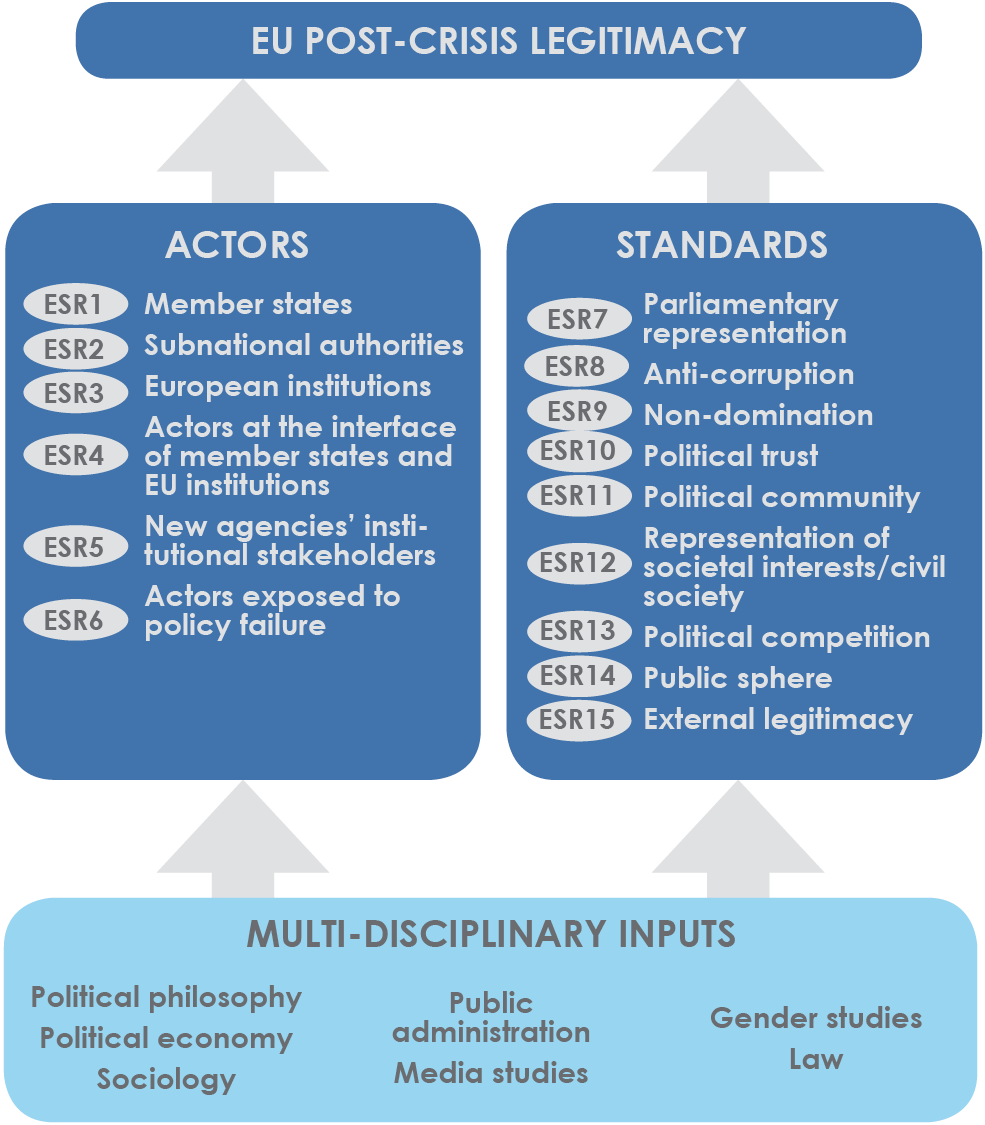 However, the need for the EU to be legitimate with member states hardly removes the need for it to be legitimate with citizens too. The origin of EU laws in EU institutions is often visible to citizens. Above all, EU laws need to be legitimate with citizens themselves if we assume that citizens ultimately need to be able to control all their own laws as equals in societies that assume individuals are, indeed, free and equal. Hence, PLATO uses nine further cases to test how far the Union’s crisis responses meet standards of democratic legitimacy. These cover parliamentary representation (ESR7); anti-corruption (ESR8); non-domination (ESR9); political trust (ESR10); identities (ESR11); civil society (ESR12); acceptance of political competition (ESR13); contestation in the public sphere (ESR14) and external legitimacy (ESR15).

PLATO promotes multi-disciplinary understanding of how different systems – political, economic, social, legal and ecological – can interact to produce problems that challenge the legitimacy of political systems within and beyond the state. PLATO also innovates in the application of state-of-the-art research methods to the study of the normative and empirical components of legitimacy.

From the initial design of the ESR projects to the synthesis of findings, a key role has been played by the development of indicators of what would count as a legitimacy crisis in the case of the EU.

See the overview of indicators used in the individual PhD projects and how all are brought together in a joint book.

The data generated by PLATO, including metadata, documentation and code, will be deposited in certified data repositories after successful PhD defence and/or as soon as research results have been published in peer-reviewed articles.

GDPR and processing of personal data

PLATO's Early Stage Researchers use official documents and media coverage to analyse the EU's post-crisis legitimacy. GDPR rights apply for all persons whose data we will be processing throughout the course of the project.