PLATO received excellent feedback from the evaluators at the midterm meeting with the European Commission on 10 December 2018. 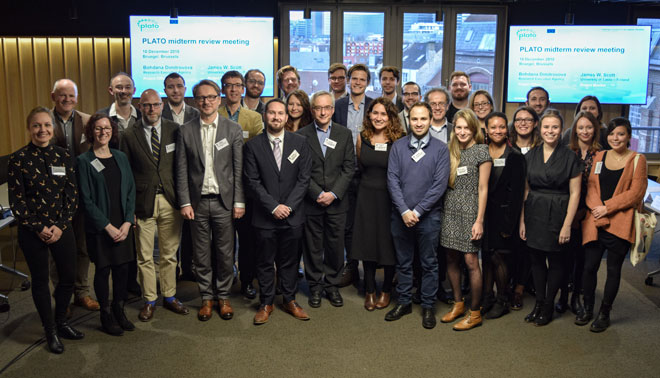 At the midterm review meeting with the European Commission, each of the 15 Early Stage Researchers (ESRs) presented the main objectives, methodology and preliminary results of his/her PhD project, gave an account of the training carried out, and addressed future prospects and the possible impact of PLATO on their career. The coordinator and project manager also presented the main features and progress of PLATO regarding scientific objectives, training, networking, dissemination and management.

The evaluators were pleased to conclude that the ESRs are moving steadily forward. The 15 PhD projects were commended for being ambitious and convincing. The ESRs were encouraged to make the most out of the opportunities offered by the project, and PLATO is expected to have a major impact on their careers.

The conclusions from the evaluators regarding the project's structure and management were also very positive, and PLATO was perceived as providing excellent training and networking opportunities.

PLATO is no doubt achieving what it set out to do

Assessing the scientific achievements of PLATO, the monitor did not identify any points to recommend for improvement. In his view, ‘the ESR presentations were convincing, and PLATO is no doubt achieving, maybe over-achieving, what it set out to do’.

PLATO organised a networking event between ESRs and the host institutions for their non- academic secondments after the review meeting. The ESRs met with representatives of the partner organisations to discuss expectations and opportunities for the secondments, which are to take place in February 2020. This gave project members an opportunity to establish good relations and start planning for the stays.

The purpose of the meeting was to assess the fulfillment of the scientific, training, management, and networking aspects of the project as described in the Grant Agreement, and is mandatory for all EU-funded Innovative Training Networks (ITNs).