'An exemplary case of a Marie-Curie Training Network'

PLATO has received an excellent final expert evaluation. According to the external reviewers, 'PLATO has succeeded in delivering exceptional results with significant immediate or potential impact'. 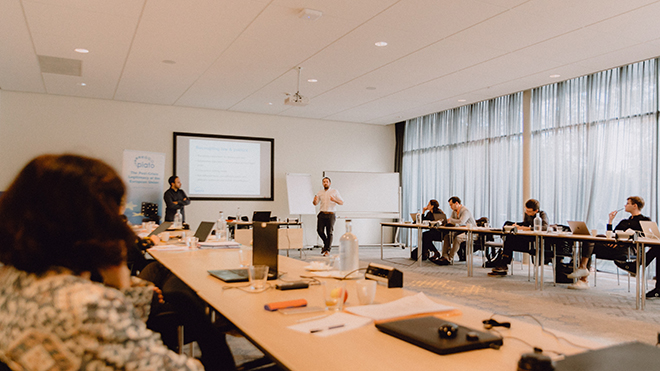 PLATO – The Post-Crisis Legitimacy of the European Union

PLATO was a European network of leading research universities and professionals from the policy advice, consulting and civil society sectors, training 15 PhD researchers to contribute to solving key policy issues for Europe.

The programme was organised as an Innovative Training Network (ITN) under the Marie Skłodowska-Curie Actions (MSCA).

MSCA is the EU’s reference programme for doctoral education and postdoctoral training, managed by the European Research Executive Agency (REA) on behalf of the Commission.

Since 2017, a team of 15 PhD students – Early Stage Researchers (ESRs) – have followed an intensive travel and training schedule while investigating the legitimacy of the EU’s responses to multiple crises as part of the innovative training programme PLATO – The Post-Crisis Legitimacy of the European Union. The project is now concluded, and despite the challenges of the COVID pandemic, PLATO has achieved all project objectives. The ESRs have presented nearly 100 papers, and published dissertations and articles.

The external reviewers are more than happy with PLATO’s performance. The evaluation stated that PLATO 'can be considered an exemplary case of a Marie-Curie Training Network':

It has contributed significantly to academic and policy debate regarding the European Union as a political community and has provided ESRs with valuable skill-sets that increase their overall research expertise, intersectoral (i.e. academic and non-academic) versatility and employability.

Moreover, PLATO’s scientific achievements have been 'substantial contributions beyond the state-of-the-art'.

According to the evaluators, the 15 Early-Stage Researchers have addressed considerable research gaps in the study of EU governance, the European public sphere and its everyday functioning in terms of a political community under constant development:

'Given the importance of addressing how EU crises are framed, PLATO represents research of clear social and political significance.'

Additionally, PLATO’s production and preparation of high-quality publications have increased the visibility of the ESRs.

PLATO’s research will be brought together in a joint book entitled Legitimacy Recovered? The Politics of Legitimation in the European Union. The ESRs have contributed with chapters and the PLATO supervisors have edited the joint volume, which will be published by UACES/Routledge this year.

Through a training network that included both academic and non-academic partners, the ESRs have refined versatile skill sets – e.g., communication, management, and organisation skills – that will serve them in all work environments.

The academic programmes and complementary training workshops have been hosted by partners all over Europe. The ESRs themselves point to the the many networking opportunities, being part of a broad research community, and strong connections with relevant non-academic partners as important factors with positive impact on their future careers.