Based on an original study on public opinion which finds that citizens are ambiguous, inconsistent and undecided, Joris Melman provides some recommendations for national governments in this first in a series of project policy briefs. 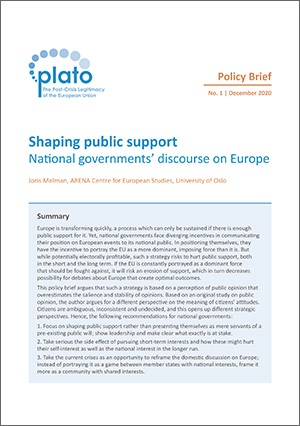 Europe is transforming quickly, a process which can only be sustained if there is enough public support for it. Yet, national governments face diverging incentives in communicating their position on European events to its national public. In positioning themselves, they have the incentive to portray the EU as a more dominant, imposing force than it is. But while potentially electorally profitable, such a strategy risks to hurt public support, both in the short and the long term. If the EU is constantly portrayed as a dominant force that should be fought against, it will risk an erosion of support, which in turn decreases possibility for debates about Europe that create optimal outcomes.

This policy brief argues that such a strategy is based on a perception of public opinion that overestimates the salience and stability of opinions. Based on an original study on public opinion, the author argues for a different perspective on the meaning of citizens’ attitudes. Citizens are ambiguous, inconsistent and undecided, and this opens up different strategic perspectives. Hence, the following recommendations for national governments: