Judicial activity in the European Union: striving for better adjudication

In order to counter accusations of judicial activism of the Court of Justice of the European Union (CJEU), and to improve its representativeness and transparency, Julien Bois identifies some reforms that do not imply treaty change. 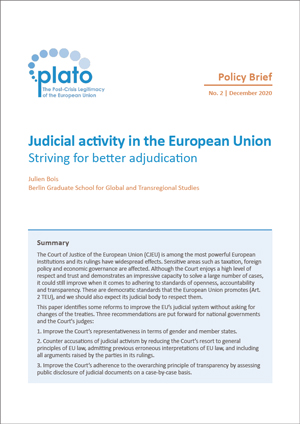 The Court of Justice of the European Union (CJEU) is among the most powerful European institutions and its rulings have widespread effects. Sensitive areas such as taxation, foreign policy and economic governance are affected. Although the Court enjoys a high level of respect and trust and demonstrates an impressive capacity to solve a large number of cases, it could still improve when it comes to adhering to standards of openness, accountability and transparency. These are democratic standards that the European Union promotes (Art. 2 TEU), and we should also expect its judicial body to respect them.

This paper identifies some reforms to improve the EU’s judicial system without asking for changes of the treaties. Three recommendations are put forward for national governments and the Court's judges: