Socialisation into European professional and political communities: An ethnographic study of seconded national experts deployed by EASO and Frontex to the Lesvos migration hotspot 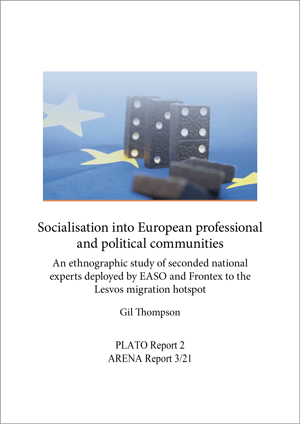 The European Union (EU), though a treaty between states, is different from previous international organisations in the depth and breadth of its aims. Termed a supranational organisation, it seeks not only to work in the common interest of its 27 member states, but in the general interest of the Union. Scholars of EU studies have long debated the construction of this emergent political community, asking whether it would come to exist the manner needed to legitimise these newfound powers. A subset of these researchers has been particularly interested in European socialisation, a field that studies how time spent working in European institutions leads to effective cooperation and the creation of a common, imagined collective. Reviewing literature dating back to the 1970s, this report finds consistent results showing that inductees’ ages and countries of origin seem to matter consistently for their likelihood of undergoing European socialisation; however, few other results appear consistently and across studies The theoretical contribution of this work is to argue that beliefs, rather than demographics should be studied. By looking at how novel organisational roles and norms cohere to those learned over time in national communities, the socialisation process can be better understood. Setting the study at the Lesvos migration hotspot, this study uses ethnographic research methods to understand the microprocesses of the socialisation process among Seconded National Experts (SNEs) deployed by the European Asylum Support Office (EASO) and the European Border and Coast Guard (Frontex) in support of Greek authorities. On the basis of intensive fieldwork, including formal interviews with 24 SNEs and participant observations, this research finds that beliefs regarding legitimate authority and what constitutes high-quality work, formed during their tenures in national professional communities, help explain the efficaciousness of the socialisation process on Lesvos. Moreover, the work finds that the European professional community built on the Greek island undergirds the formation of an inchoate political one. These results contribute to those early questions asked by scholars of European integration and contain practical lessons for mangers and trainers overseeing diverse European workforces, as well as for policymakers and civil society looking to instil best practices.

E-mail this page
>
PLATO reports > 2021 > Socialisation into European professional and political communities: An ethnographic study of seconded national experts deployed by EASO and Frontex to the Lesvos migration hotspot