Constrained partisanship: A comparative study of policy choices and party discourses in the British and Spanish crisis experiences (2008-2014) 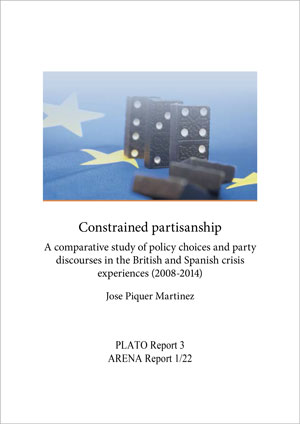 This thesis explores the role of partisanship in shaping the policy choices and legitimizing discourses of governments during the global financial crisis. To do this, it uses comparative case studies, examining the experience of left- and right-wing governments in both the UK and Spain between 2008 and 2014. The study combines analytical narratives with content-discourse analysis, drawing on an original corpus of political speeches.

This research finds that, under significant political-economic constraints, parties make choices contrary to their partisan identity. Following the global financial crisis, conservative governments bailed out private banks with public funds. Liberal parties previously committed to ‘tax-cuts-always-work’ raised taxes across the board and social-democratic governments slashed public spending in the wake of the Great Recession.

The dissertation also finds that parties across the ideological spectrum adapt their legitimization discourses. Appeals to ideological discourses of left and right lose traction as these appeals become less effective in justifying parties’ choices in an ideologically coherent way. In their place, other political discourses gain salience as legitimization strategies for policy choice. In particular, governments increasingly appeal to expertise and competence (technocracy), legality and legal obligations (legalism) and emergencies and exceptions (exceptionalism).

The comparative analysis finds in both the British and Spanish cases a form of what the thesis calls constrained partisanship. All four governments adapted their crisis choices as a consequence of external constraints. Yet the analysis also reveals two relevant differences. As a result of euro membership, the Spanish executives governed under more severe constraints than their British counterparts. Consequently, the way in which constrained partisanship emerged in each national context was different. In constraining partisanship, the actual effects of political-economic constraints were decisive in the Spanish case. In contrast, the internalisation of those constraints by the Labour and Tory leaders were more determinant than their actual effects.

In the UK and Spain, nonetheless, politicians governed most of the time as if they were deeply constrained to act in certain ways. As a result, left- and right-wing governments adapted their legitimization discourses. The corpus analysis shows that the leaders of the four governments relied on technocratic, legalistic and exceptionalist claims to justify key policy measures throughout the crisis. At critical moments, different parties ended up speaking the same political language.

Looking at economic policymaking and party discourses, this study offers a more encompassing understanding of constrained government. In doing so, the thesis contributes to an ongoing inter-disciplinary debate about the changing nature of partisanship in European politics. Technocratic, legalistic and exceptionalist discourses cut across ideological and party lines. The endurance of these discourses questions the relevance of the language of left and right as a way of making sense of political competition in contemporary European democracies.

E-mail this page
>
PLATO reports > 2022 > Constrained partisanship: A comparative study of policy choices and party discourses in the British and Spanish crisis experiences (2008-2014)