Main navigation
Sub navigation
Publications > PLATO reports > 2022 > The uncertain world of the Court of Justice of the European Union: A multidisciplinary approach of the legitimacy of the EU judiciary in the 21st century

The uncertain world of the Court of Justice of the European Union: A multidisciplinary approach of the legitimacy of the EU judiciary in the 21st century 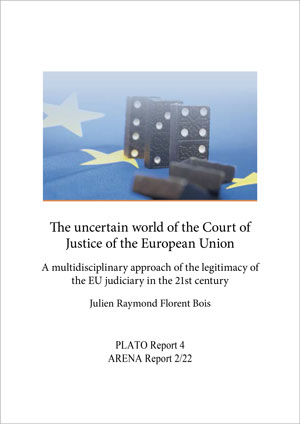 The Court of Justice of the European Union is one of the most contested European Union institutions. It is a non-majoritarian body that wields power beyond the state and imposes its rule to citizens and directly legitimate national governments. Despite numerous bold rulings that went beyond the expectations of member states, added to the alleged global legitimacy crisis suffered by the EU in the 21st century, the CJEU was the most likely candidate to face total disempowerment. Yet the Court’s mandate has been extended as a result of the economic and financial crisis, and its involvement in the control of the new economic recovery fund in the context of the COVID 19 crisis led 2 member states to lift their veto to the most important recovery plan of the century. How is the Court seemingly not suffering a legitimacy crisis in the 21st century?

Answers to this paradox require a comprehensive exercise of theory building of the Court’s legitimacy. The latter is a concept traditionally employed to assess the justified right to rule of powerholders within nation-states and was used to describe the whole polity rather than some of its parts. Existing legitimacy concepts must be redefined in order to characterize the transnational non-majoritarian body. The thesis thus provides a comprehensive and multidisciplinary account of the legitimacy of the CJEU, drawing insights from law, political science and sociology. It recalibrates the use of concepts such as the “input-throughput-output” trichotomy to the specificities of the judiciary and combines theories of judicial review developed in legal scholarship with actor-based accounts found in empirical social sciences.

The thesis rejects the division between normative and sociological legitimacy and advocates for a recoupling of both sides in order to have a complete picture of the CJEU’s right to rule. The question of the Court’s audience is crucial. Standards of judicial legitimacy are forged according to the social characteristics of the Court’s attentive public. Since the CJEU is a non-majoritarian institution evolving on the transnational scene and exercises an expert activity discriminating legal specialists from other citizens, the Court’s attentive public is (as determined by the analysis of judges’ interactions and the properties of the Court’s followers on Twitter) composed by the EU legal profession.

Normative standards of judicial legitimacy in the EU must be forged according to the expectations of the Court’s attentive public while respecting broader social dynamics found in all member states. In terms of the Court’s sources of legitimacy, the Court must respect its mandate enshrined in the treaties and judges must be outstanding legal professionals and reflect the population of the member states. It must respect due process and associate its attentive public to the interpretation and enforcement of EU law as much as possible. It must also deliver sound results that correspond to its status as the supreme court of the Union.

The thesis concludes by claiming that the CJEU is not suffering a legitimacy crisis in the 21st century. The legitimacy deficits that characterize its activities are progressively addressed or remain minor, and do not outweigh the support that judges built with the legal profession over decades. The thesis nonetheless identified several institutional and behavioral shortcomings and includes a series of recommendations that address the mere legitimacy problems faced by the Court today.

E-mail this page
>
PLATO reports > 2022 > The uncertain world of the Court of Justice of the European Union: A multidisciplinary approach of the legitimacy of the EU judiciary in the 21st century