New understanding of EU legitimacy and anti-corruption: The role of the representative democracies 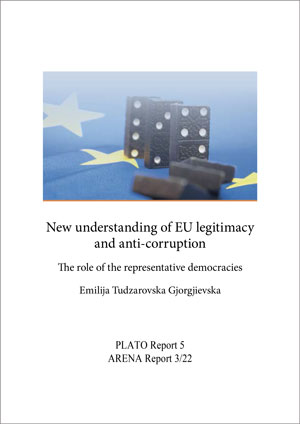 This research aims to investigate the causal linkages between the EU democratic legitimacy and the crises of representative democracies in the field of anti-corruption. The threats of corruption to the EU democratic legitimacy and the approach in handling this negative phenomenon are seen as symptoms of a more profound crisis of the EU integration project. The mutual interdependence between the EU and its member states in delivering the standards of democracy, its values, and principles are seen through legitimation as an act of actual justification. This actual exercise of the EU’s indirect legitimacy in normative terms is translated into action through the key actors of representative democracies on a national level, the national parliaments, and the political parties. However, the role of the parliaments and the party democracy in the broader EU context, especially evident in Central-East Europe (CEE), has been challenged and is weak, suggesting a hollowness of democracy. This status has also been challenged by the misuse of political power for private gains, as a general understanding of corruption, adopted by the EU. However, the mutual reinforcement of corruption and the hollowness of democracy have remained under-acknowledged in the broader neoliberal context. The reasons behind this are a few, starting with the thick conceptualisation of corruption, the EU approach towards corruption, the specifics of the CEE countries concerning party democracy, party cleavages, and the transformations from communist to neoliberal democratic regimes.

This research, therefore, takes a different approach and sets the premises that corruption as a negative phenomenon is an old concept, introduced on a greater scale by the liberalisation and deregulation of the financial markets in the 1990s, and takes roots in the increased hollowness of representative democracies. The historical preconditions of communist regimes, the historical context (EU enlargements; the post-1989 Cold war period; EU crises), and especially, the specifics of the process of Europeanisation are important features in the understanding of a) the conditions under which corruptive practices are taking place, b) the EU approach in addressing corruption and c) the outcomes in the form of democratic backsliding.

Corruption is not an isolated phenomenon, nor should it be treated as such, if we aim to understand the logic of the contemporary challenges of liberal democracies in the European Union, especially the deterioration of the rule of law. As an abstract concept, it also deeply incorporates the principles of legality and impartiality. This research, therefore, does not claim that it will produce a new definition of corruption, as this might be an impossible task. However, it does suggest a new logic of understanding this negative phenomenon through the lenses of state transformation under the process of Europeanisation and the gradual hollowness of democracies bound to an unaccountable use of power. In order to do so, in this research, we will use two concepts of corruption: legislative corruption (Kaufmann, 2005; Kurer, 2005) and corruption as a social trap or lack of social trust (Rothstein, 2011). Both concepts are essential for understanding the misuse of power when doing politics on behalf of the ‘people’ or the citizens seen as the ultimate source of legitimacy in the actions of the political actors. By looking into the processes of legitimation through the national parliaments on a nationstate level, this research will give answers to the conditions under which EU democratic legitimacy is expected to satisfy democratic standards and principles by ‘borrowing’ legitimacy from representative democracies of its Member States, i.e., through indirect legitimation and contribution to the democratic embeddedness.

Within this scope, this research will argue that national parliaments, political parties, and elected members of parliaments can play essential roles in pursuing effective anti-corruption strategies and, as such, can provide for indirect democratic legitimation, both on a national and an EU level.

Therefore, this research took the position of examining the necessary conditions under which parliaments and political parties could provide for democratic legitimation and act as institutional guardians of representative democracies in the service of citizens. In order so to do, it has empirically examined the role of the states and their capacities to exercise the functions of legitimation and provide for the internal (national) and external (EU) embeddedness of democracies. Using three paradigmatic cases in Croatia, Slovenia (EU Member States), and North Macedonia (EU applicant state), based on document analysis and expert semi-structured interviews, the research has unpacked the causality between the observed theoretical fingerprints and the actual empirical findings.

The research has found that the difficulties in consolidating democracies, especially evident in the CEE, are linked to the process of state transformation under EU integration, bound to the general weakening of the national parliament/legislatures vis-à-vis the role of the executive; the centralised party politics, particularly the lack of internal party democracy, and the questionable law-making processes. These conditions have contributed to opportunities in which citizens lack proper democratic representation, resulting in weak law enforcement (social traps) and further disenchantment between the citizens and their societies. These conditions do not allow for rooting out corruption from the political systems. Furthermore, the weak role of the national parliaments, particularly in its oversight capacities, and the weak internal party democracy, constrains the possibility of creating a political culture of accountability or restoring the social trust of the citizens. The lack of social and institutional trust inhibits democratic embeddedness and reduces the quality of representative democracies, both on the nationstate and EU level.

The facades of legitimation exercised in the national parliaments indirectly affect the EU’s democratic legitimacy. Moreover, improvisation in the exercise of democratic accountability constrains the identification of potential or actual abuses of power, particularly legislative corruption. Nevertheless, the EU approach towards anti-corruption has remained mainly limited and associated with the EU enlargement processes and the post-communist states. This research has also found that the current EU approach in tackling corruption under the European Semester is insufficient and requires a new comprehensive approach that can also tackle the hollowness of citizens’ representation and the ineffective rule of law’ present in many contemporary democracies.

These views also suggest that the exercise of horizontal and vertical accountability - democratic accountability – through the capacities of the national parliaments are necessary conditions for internal and external embeddedness of democracies and taking control over legal abuses of power, particularly legislative corruption. Moreover, when an actual legitimation takes place through national parliaments, societies may regain the chance to revitalise broken trust, break the patterns of social traps, and provide for the quality of democracy. However, this sentiment requires an acknowledgement of the involvement of the EU and the states in the safeguarding of the EU integration project, built on democratic values and principles

E-mail this page
>
PLATO reports > 2022 > New understanding of EU legitimacy and anti-corruption: The role of the representative democracies