Harmonised asylum policies in the European Union? The role of street-level bureaucrats in the implementation of the Common European Asylum System 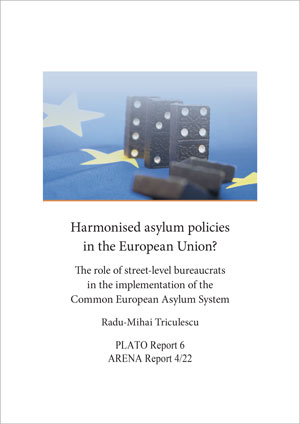 This thesis approaches the topic of asylum policy harmonisation from a legal and public administration perspective. As such, an understanding of the effect that country-specific contexts have on the establishment of a comprehensive asylum policy in the European Union is constructed. Through the observation of how harmonisation of asylum legislation manifests itself in practical implementation guidelines, the research makes a claim about the influence that street-level bureaucrats may have on the output of a policy that starts at the EU level, but that must pass through the filters of multilevel governance.

For such an evaluation to be made, European directives of the CEAS are analysed in terms of the ambiguity – and discretion – present within them, and these ambiguities are then tracked in legislative transposition at the national level in Romania and the Netherlands. Through deconstructing the legal basis upon which street-level bureaucrats must act, an image of the individual worker’s discretionary space emerges. Finally, following an analysis of the data covered, a comparison is made. Using the administrative legacies of the two countries as an analytical lens, this thesis sheds light on the ways institutional differences between Eastern and Western Member States of the EU need to be accounted for in any research dealing with EU policy implementation.

This thesis attempts to bridge some of the gap that exists between research on the management of asylum applications and the real-world context in which these decisions take place. The results show that the opportunity that street-level bureaucrats have to influence the implementation of asylum policy is more dependent on national administrative structures than on the specific legislative measures at the EU. The ‘capacity for judgement’ given to Romanian bureaucrats, or the co-creation of norms in which Dutch public officials partake are signs that the opportunities to influence policy lie beyond straightforward discretionary clauses found in legislation. Lastly, while this work has set out to attempt to find instances of bureaucrats influencing the output of asylum policies, it has managed instead to find where such opportunities lie, but not exactly if and how advantage is taken of these opportunities.

E-mail this page
>
PLATO reports > 2022 > Harmonised asylum policies in the European Union? The role of street-level bureaucrats in the implementation of the Common European Asylum System