PLATO panel at the ECPR conference

PLATO coordinator Chris Lord is chairing a panel with papers by five PLATO PhD researchers as part of the ECPR General Conference in Wroclaw. 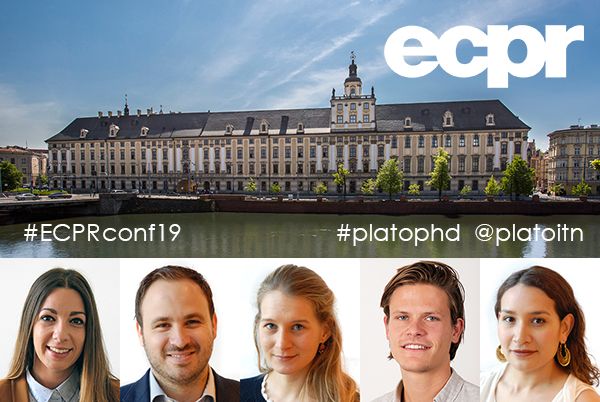 The ECPR’s General Conference remains Europe's largest annual gathering of political scientists, often attracting more than 2,000 scholars from throughout the world and at all stages of their career. With nearly 500 panels taking place across 70 sections, this year's academic programme covers the breadth of political science, creating the platform for lively discussion, exchange of ideas and the best thinking in the discipline.

Four PLATO PhD researchers will present their work as part of Panel 285: Politicisation, Representation and Legitimation Crisis(?) in the European Union: Elena Escalante Block, Joris Melman, José Piquer, and Ivana Skazlic. The panel is chaired by PLATO Coordinator Chris Lord and is part of Section 10 Challenges of Representation in the context of EU Politicisation.

Other PLATO PhD researchers will also present their work in different panels throughout the conference, on topics such as political trust, European Courts and stakeholder mobilisation.

Answers to these questions are likely to depend on how and by whom publics are represented on EU questions, This panel, therefore, includes papers on the politicisation and representation of partisan ideological identities by governments seeking to justify economic adjustments to the financial crisis; on the representation of national parliaments in the public control of the European semester; on attempts by the European Commission to frame itself as a representative of EU citizens in deciding state aids cases; and on the role of citizens themselves in representing their own emotions and understandings of the European Union and of the Euro through focus groups. All papers are based on PhD research within the PLATO network on the legitimacy of the European Union after the financial crisis (funded by the Marie Skłodowska/Curie programme of the European Commission).

Between politicization and indifference: Studying attitudes towards the Euro using focus groups

While the role of the public is increasingly central in European studies, many questions still persist on how to understand public attitudes towards the integration process. With a majority of research focusing on support using targeted polls, much is unknown on the grounds for such attitudes, their intensity, and hence their meaning in terms of legitimacy. In response, this paper proposes an approach focusing more on the content of attitudes. Following this argument, it present the results of a series of focus groups conducted in the Netherlands and Italy focusing on a particular element of European integration: the euro. A first, intuitive analysis of these results shows that despite a politicization of European politics at non-citizen levels, both integration in general and the euro in particular are for citizens still too complex, distant and enmeshed in a general sphere of ‘abstract politics’ to form an active stance on, which downplays recent claims on the EU’s dependence on public attitudes.

Legitimacy of the European Semester procedure: National parliaments to the rescue?

The paper examines the functioning of the European Semester procedure of enhanced EU coordination and surveillance of member states´ economic and budgetary policy-making at the national level. In particular, it investigates the participation of national parliaments in this procedure outside the immediate time frame of the recent economic and financial crisis (2008/2010-2013). This is important because some parts of the procedure and their effects remain untested 'post-crisis', including the participation and contribution of national parliaments. Therefore, the paper asks to what extent are national parliaments providing for transparency, accountability and democratic legitimacy of the procedure at the national level in the 2014-2017 period, having in mind that they were largely downgraded during the crisis and early stages of functioning of the reconfigured European economic governance. More generally, the paper addresses fundamental question whether national parliaments contribute to the legitimacy of the EU economic governance by performing their democratic functions. This is done by assessing the actual parliamentary practices in the European Semester in the selected period against expectations for their involvement, provided in the EU legal and political documents and academic considerations. In particular, scrutiny practices of selected national parliaments concerning government´s European Semester-related policy documents (Stability/Convergence Programme and National Reform Programme) as well as EU recommendations are assessed, focusing on the parliamentary scrutiny activities at the committee(s) level and in plenary as two major scrutiny mechanisms. In the analysis, a special attention is paid to the extent to which parliamentary scrutiny systems are used to provide for meaningful exploration of issues at stake by distinguishing varying degrees of parliamentary scrutiny of the European Semester-related documents (ranging from mere parliamentary acknowledgement to the fully elaborated discussion on these documents).

Political legitimation in times of crisis: Legitimising the economic adjustment in Spain and the UK

European governments made unpalatable policy choices during the Great Recession. As a consequence, left-wing and right-wing governments had to justify unpopular decisions to increasingly sceptical electorates. This paper argues that how governing parties choose to legitimise the economic adjustment depends, among other crucial factors, on the extent to which EU membership alters the political, legal and economic environment in which governments operate. In this paper I examine this proposition by looking at the British and Spanish cases. As part of a larger research project, this paper focuses specifically on how the European dimension was incorporated into the left-wing and right-wing governments’ legitimation strategies of the economic adjustment. I review a sample of political speeches here as a first step towards a more comprehensive analysis, which I do not present. This preliminary analysis provides an overview of the legitimizing language used by the four governments that were in office during the financial crisis in both countries.

State aid, its claims and the question of representation

In one of her interviews in 2017, when talking about the Apple state aid case in Ireland, Margrethe Vestager, the Competition Commissioner stated: “We are doing this because people are angry about tax avoidance and the [European] council knew that it already had the power to do something to change that. The thinking was: ‘Let’s try to do something different within the system we have. Something that means no change to legislation or voting systems, but a change in attitude that acknowledges that people across Europe are angry” (Margrethe Vestager in Writes 2017). In this way, Vestager was claiming to act in the interest of the people, thus becoming their representative. In the same context, the Irish government defined the case as an “encroachment of EU state aid rules into Ireland’s sovereignty around taxation” (Brennan 2017), stating that “it is necessary to defend the integrity of our tax system and provide tax certainty to business” (Brennan 2017).

Against this background, this paper takes the Apple state aid case as a prime example to analyse how the European Commission (more specifically the DG-Competition) uses state aid cases to legitimise and frame itself as a representative of EU citizens. More specifically, it traces: a) how the state aid became politicised, b) the claims used by the different actors to legitimise or delegitimise the Commission’s actions and lastly, c) how the EU is trying to connect and represent Irish citizens through these state aid cases. The politicisation of this case will be analysed using a claims-making analysis, which evaluates the claims that political actors make in order to represent certain policy preferences, constituencies or values (Saward 2006), and to legitimise their actions.

E-mail this page
>
2019 > PLATO panel at the ECPR conference