The last of four PLATO PhD schools recently took place at the University of Twente. Entering their third and final year, the PhDs discussed preliminary findings, publishing strategies and research communication, and a lot more. 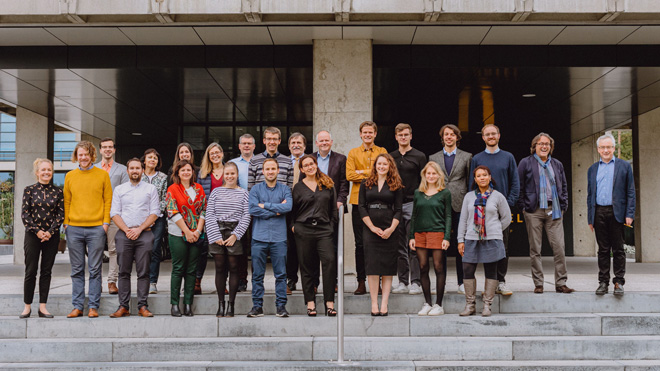 The PhD school was the last of four week-long PLATO schools bringing the team together from across Europe. At each school, the group of 15 Early Stage Researchers (ESRs) have discussed their research and engaged in non-academic training and career development sessions.

The school marked the two year anniversary of the very first PLATO meeting at the University of Oslo. Over the last two years, the ESRs have worked hard on their PhD projects while also following an intensive training programme.

Becoming a presenter with impact

At the Twente school (14-18 October 2019), the ESRs presented preliminary findings from their individual projects and their contributions to a joint book edited by PLATO supervisors. Colleagues from the University of Twente's Public Administration department as well as incoming scholars and supervisors acted as discussants, and engaged in fruitful discussions of the approaches, analyses and findings from all 15 projects. This lays the ground for the team's work on synthesising the contributions into a coherent whole to be published as a book on the EU's post-crisis legitimacy.

Keynote on the legitimacy crisis of global governance

To complement the academic programme, Prof. Michael Zürn held a keynote speech on the legitimacy crisis of global governance. With his theory of global governance and the decline of the liberal world order as the point of departure, he linked his seminal work to that of PLATO.

One of the school's non-academic training sessions introduced the ESRs to the basics of communicating research to different audiences. Katy R. Mahoney (Researcher Coaching) guided them through the fundamental questions of research communication and the power of social media to promote research to a wider audience.

Also, as a team of ESRs has been preparing an academic blog to present the research to a broader audience, the platform was presented to the group and the researchers considered topics for their own contribution to the PLATO blog Post-Crisis Democracy in Europe.

Supervisors joined two panels addressing the two most common types of academic publications: monographs and peer-reviewed scientific articles. As experienced authors and editors they provided advice to support the ESRs in developing their own publication strategy. Among the questions addressed were how to select a journal, the importance of journal rankings, different editorial procedures and how to deal with rejection or a 'revise and resubmit'.

In a separate session, the project manager addressed the driving forces behind and benefits of Open Access publishing and demonstrated how ESRs can publish their own work in line with this policy.

Another session was dedicated to help ESRs navigate the final year of their doctorate and plan for the non-academic secondments that are coming up in a few months. As part of the project's mobility scheme, each ESR will spend one month with one of the project's training partners, notably think tanks, NGOs or a consultancy. Under the skilled guidance of Emma Gillaspy (University of Central Lancashire) and Katy R. Mahoney, the ESRs considered the purpose of the placements and started planning their stays in terms of activities and learning outcomes. Together they identified numerous benefits, including expanded networks, fresh ideas and improved career perspectives, and realised that managing expectations and investing time in preparing for the secondment are crucial factors for a successful stay.

As part of the PhD school, PLATO supervisors attended the third and final supervisor workshop held by Vitae. It addressed key elements of effective PhD supervision, such as managing expectations, supporting effective goal setting, encouraging progress, adapting to individual needs, and dealing with difficult circumstances. The supervisors shared and discussed best practices to support PhDs in finishing their projects on time.

The University of Twente campus proved to be the perfect location for the last PhD school, which was organised by the project's team at the Department of Public Administration, namely Ramses Wessel and Bas Denters and the three ESRs Dominika Proszowska, Radu-Mihai Triculescu and Elena Escalante Block, in cooperation with PLATO coordinator Chris Lord and project manager Marit Eldholm at ARENA Centre for European Studies, University of Oslo.

Upon invitation by Bas Denters, the team also had the opportunity to visit FC Twente football stadium De Grolsch Veste and learn more about their strategy for engaging with the local community through their 'Scoring in the Neighborhood' programme. The club's keywords 'pride, ambition and solidarity' had resonance with the project's team, and could also be adopted as keywords for the team PhD experience that PLATO is.